Dallas taco shop offers free coats for those in need

Carnitas are their specialty. But now, free coats are also served up on the side. 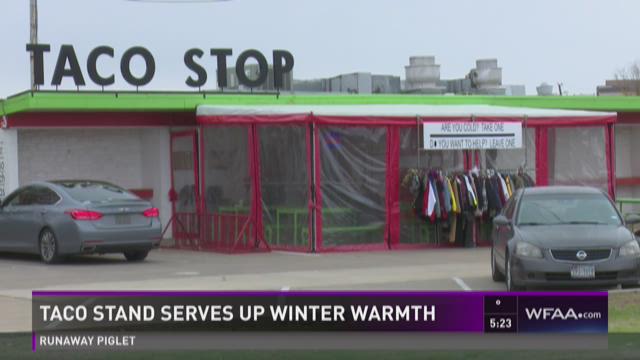 Carnitas are their specialty. But now, free coats are also served up on the side.

The sign above it says ‘Are you Cold? Take one. Do you want to help? Leave one.”

Emilia Flores first saw the gesture on display in towns throughout her native Mexico.

"And I thought it was a wonderful idea,” she said. “So when I came back I did the same."

And since she did it first last year, the coats keep coming. Thomas and Jacki Brewer drove all the way from Richardson on Thursday after scouring their closet for coats they just don’t wear anymore.

"Today is my birthday,” Jacki Brewer said. “And I said this is what I want to do for my birthday, do something for somebody else."

Thomas, a retired Marine, even dropped off a warm Marine Corps-labeled trench coat and a barely worn topcoat.

"I can just see somebody walking around in that,” he said.

And just five minutes later, a construction worker named Eddie picked out that same coat. He fit perfectly in the full-length wool, size 42.

"This is a way of people not being embarrassed about asking,” said Flores. “They just come and pick what they need and leave."

So why at a taco stand? Because Emilia worked 20 years as a professional psychologist. Whether it’s about helping the homeless, the low income, or people just down on their luck, her effort is about just being kind.

A coat rack outside Taco Stop in Dallas

“In small ways you can actually make a difference,” she said. "And this year particularly I thought that the world is so polarized and the country is so polarized, it's just another reminder that it takes very little to make life easier for people."

Four times last year someone stole the entire wardrobe. But Emilia and her customers kept replacing it. And she said they will again if they have to this year.

Because all winter, along with the carnitas and prime rib tacos, a kind gesture will stay on the menu too.