A cancer fighter, and the gift of a dream wedding she thought she’d never have

While still on her own difficult two-year road, Nikitia started her own non-profit called Kindred Angels. 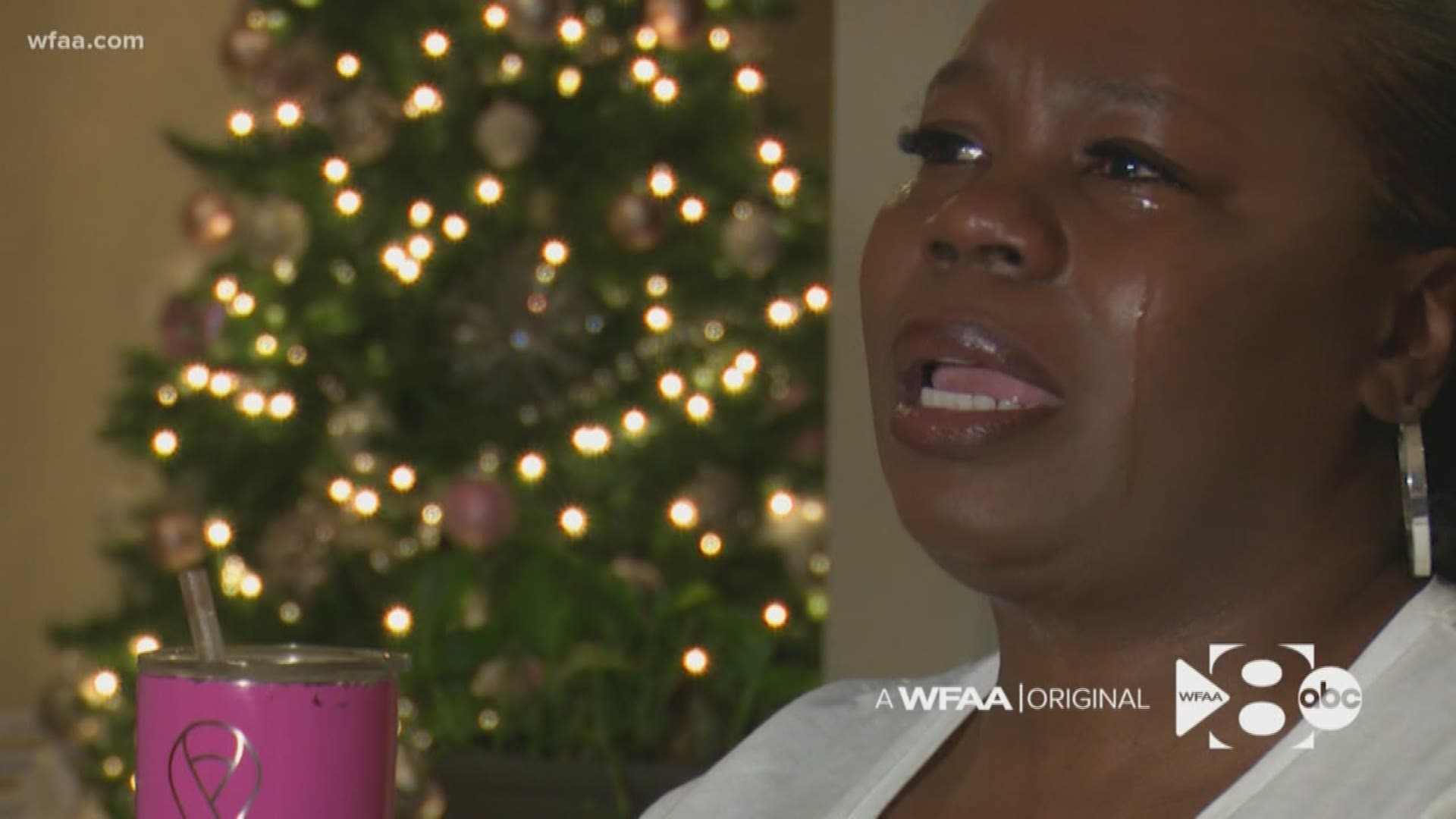 A Grand Prairie woman, who put her planned wedding on hold two years ago so she could focus instead on a battle with breast cancer, will finally get her dream wedding. And it will happen at no charge to her thanks to the Society of Wedding Professionals.

Weeks ago, when I visited Nikitia Ferguson at her home in Grand Prairie, the tears began to stream down her face even before we could begin the official interview and turn on the video cameras. Tears flow easily when you are recounting the day a doctor gives you the worst news of your life.

"She said but you have Stage 3 breast cancer. And I lost it," Nikitia said of the emotional state she suddenly found herself in. The tears would flow again when she had to break the news to her 10-year-old daughter.

"She says mom are you gonna die? And to hear your child ask you if you're going to die, at that point I didn't know. But how do you tell your daughter you don't know? So I was like, 'No, I'm going to be great,'" she said admitting she was trying to shield her daughter from the reality of a very serious diagnosis.

"And Mr. Reece I have held onto that faith of I'm not going to die since that moment. I cried a lot. But by the end of the night, I knew that that I was gonna be OK."

She maintained that faith through six months of chemotherapy, a double mastectomy, then a hysterectomy and multiple reconstructive surgeries. It has been a long two years. "But I’m still here. I'm still smiling," she said.

But the cancer fight had one more cost: the wedding she and her fiancé Fred Morris had to call off.

"By the time he asked me to marry him, breast cancer was coming," she said. "Everything was surgeries, doctor’s appointments, medication, how do we pay this bill, how do we pay that bill. So our focus was totally not on a wedding, marriage."

But late last year, she learned that dream still had a fighting chance, thanks to people like Rebecca Hackl.

"Why don't we utilize our strengths and talents and we all can come together as one team, one purpose, one mission," Hackl with the Society of Wedding Professionals said.

That mission, in their first year of offering a "Wedding Wish" became the public-service focus of the Society of Wedding Professionals in Dallas and Fort Worth. They wanted to give back, to find someone worthy of being gifted a wedding.

And they found a venue willing to offer its services too: Hidden Creek, an 8,000 square foot wedding and meeting venue in Heath.

"This is our calling. It's what we do every day. It's what we're good at," said Tiffany Bell with the Society of Wedding Professionals. "There's plenty of people out there who really want to get married, and so we really wanted to provide that for them."

And yes, they chose Fred and Nikitia in an online contest, but not just because of cancer. "I just try to be whatever support I can be to others battling the same road," Nikitia said explaining why SWP chose her and Fred.

While still on her own difficult two-year road, Nikitia started her own non-profit called Kindred Angels. Her Facebook page is called "The Best Candidate" because she believes that, with her positive outlook on life, she is someone who had the focus and drive and optimism to succeed in a cancer fight. She shared her entire two-year journey online. She's given away dozens of care packages to other cancer fighters. She offers them a Build-A-Bear, a knit cap, warm socks, make-up, and more.

"Because through our cancer, we are now related," she said. "My hope is that when they look at the bear, they can smile knowing that they're going to be OK, and that there is someone out there rooting for them to be OK."

"I feel like that was a wink from God, telling me to keep going. Keep doing what I'm doing," she said. "And it took me being diagnosed with breast cancer for him to use me in the way that he needed me to be used."

That's why the Society of Wedding Professionals (SWP) chose Nikitia. And at the Hidden Creek venue on January 20, at no cost to her, her wedding dreams will finally come true.

"It's not all about spending millions of dollars on a wedding," said Ricardo Tomas of SWP. "It's more about the integral parts of putting it together and making it a personal event for them. It's something they're going to remember for a lifetime."

"We're just hoping that this becomes an annual event and that we really are able to touch other couples lives and give them the wedding that they too deserve," added SWP's Karen Higginbotham.

"So it's to say that not all is lost, you know, and giving up hope," said Isaac Mathai the owner of Hidden Creek. "They can take from this moment and go up, go higher."

"I want them to walk away very happy and satisfied and with a joyful heart," added SWP's Rebecca Hackl.

And if there was ever a joyful heart, it belongs to Nikitia. "Blessed with such an amazing gift that anyone can be given," she said.

Oh, and one more thing. Nikitia is in remission too. "Oh, it's gonna be a party like none other. Fred loves to party. And so do I," she laughed.  "And I will continue to smile and try to live the best life that I can."

Her best life, with the gift of the wedding of her dreams, gets a fresh start later this month.