The gospel of CPR: Rockwall minister has a new life-saving story to share

"One of the quickest most successful cases I've ever seen where everything just fell into line perfectly," said Dr. Meghan Smith of Baylor Scott & White Lake Pointe. 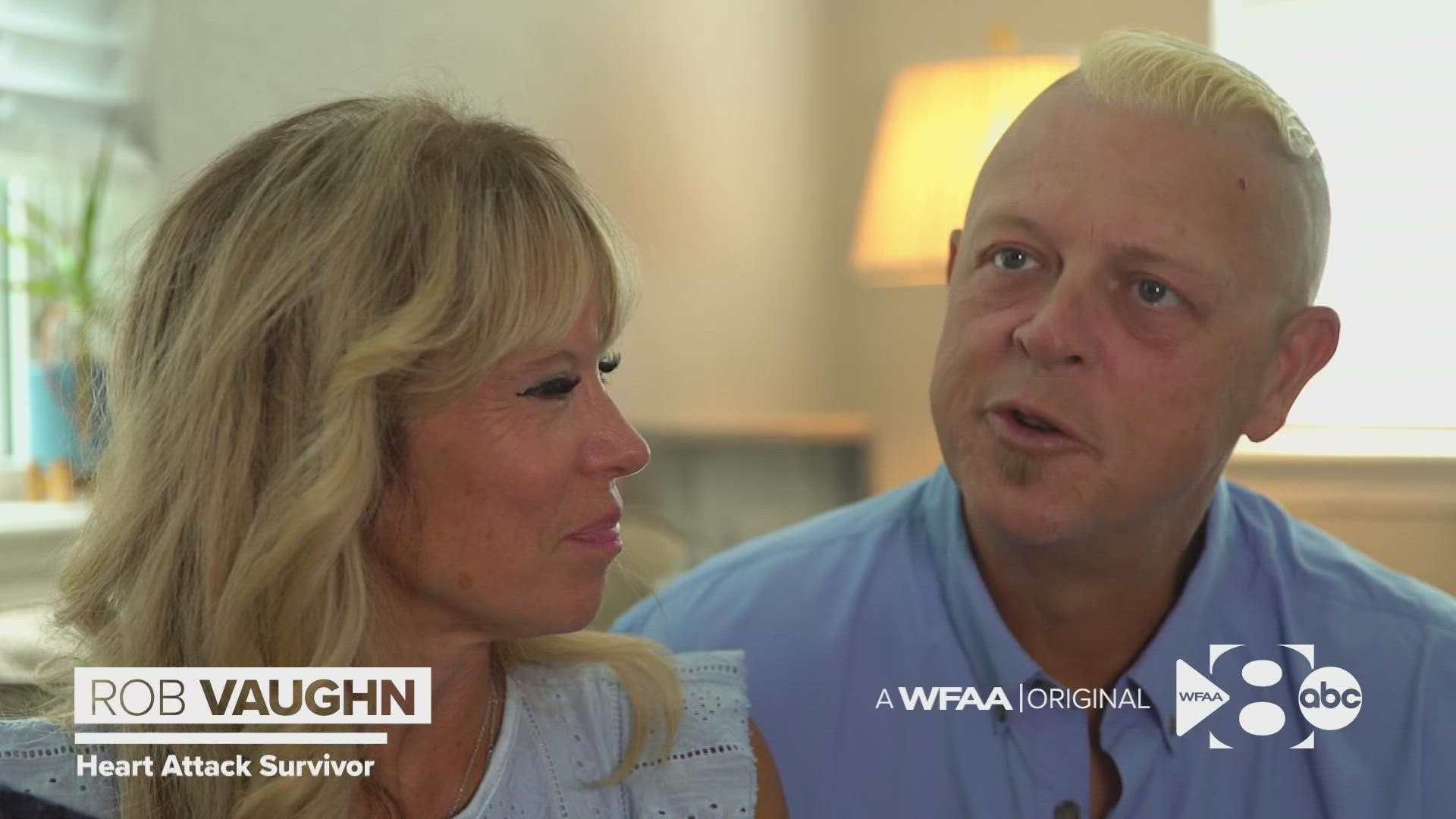 ROCKWALL, Texas — Rob Vaughn has a unique way of sharing the gospel. Now he has a unique, hard-earned story and a different life-saving gospel to share: the gospel of CPR.

For nearly two decades his alter ego has been the "Jesus Freak." That's his persona when he jumps into the ring to lead the Christian Wrestling Federation. The group he founded in Rockwall County uses the spectacle of professional wrestling to draw a raucous crowd for a quiet message about faith.

RELATED: From the archives- Wrestling for souls: Why these North Texas church-goers are body-slamming for Jesus

"And that's the greatest tag team partner you can find right there...is Jesus," he said in his brief sermon when we first met him in 2018 after a wrestling event in Fate.

But on June 12 this year, after a night of wrestling, the applause stopped.

In his tiny rental home in Rockwall, his heart stopped.

"I went to tell our daughter goodnight. And I heard this thud," his wife Beth said.

Their daughter Brooke made the call to 911. Rob, in a small bathroom, had collapsed on the floor blocking the bathroom door. His wife struggled to get the door open.

"My stepdad is in the shower and my mom is trying to get him out and we don't think he's breathing," Brooke said in the 911 call.

"Mom I need you to tell me what to tell them," she said.

"OK, is the door open?" the EMS personnel asked over the phone.

"I need the phone next to her or somebody who can do CPR and listen to my instructions," the male voice said over the phone. Beth Vaughn had since pried the door open enough to crawl over the bathroom sink to find her husband in the fetal position on the bathroom floor.

"Mom, is he breathing?" Brooke asked.

"Now, I want you to pump the chest hard and fast at least twice per second and two inches deep," the EMS personnel said over the phone. "Count out loud so I can count with you. One, two three, four...one, two, three, four..."

But at just four minutes into the 911 call, you can hear someone else entering the home.

"What am I supposed to do?" Beth Vaughn said as she continued to ask for instructions. "Are they here? OK, help," she said to a police officer who rushed into the room.

"Hang on! They're here," she said to the operator.

"He was gray. His eyes were pointing in different directions. His lips were blue. And I didn't think he was going to make it," Rockwall police officer David Taylor said. He was on patrol nearby that night and moved Rob Vaughn onto the bedroom floor to continue CPR.

Officer Aaron Raymond jumped in and performed CPR next. Zach Yates and Greg Givens of the Rockwall Fire Department arrived next and had to use a defibrillator to shock Vaughn's heart three different times to get a pulse. And once they rushed him the three-and-a-half miles on Highway 66 across Lake Ray Hubbard the to Baylor Scott and White Lake Pointe in Rowlett, they had to shock him two times more.

It was a complete blockage. The one they called the widow-maker. That's what they told his wife.

"They took really good care of us. They were so kind and tenderhearted," Beth Vaughn said. "But I kept remembering in my head, 'I just found you. I just found you eight years ago. I am not ready to give you up.'"

And she didn't have to.

"It's a small rent house and she was able to hear me," Rob Vaughn told us a month-and-a-half after the incident. Doctors at Baylor Scott & White diagnosed him quickly, had him transported to their catheter lab within 10 minutes, and installed a stent in the collapsed portion of his heart.

"And when I stepped out right here the door was shut and that's the last thing I remember," Vaughn said standing in the small bathroom where he collapsed.

"If we were still in our big house we would have been on opposite ends of the house and she may not have found me in time."

Dr. Meghan Smith was one of the emergency room doctors that night at Baylor Scott & White Medical Center - Lake Pointe. She says they found a major artery supplying his heart completely blocked. But she says that with early CPR by Beth Vaughn, additional CPR by the officers and medical personnel who arrived, and then a quick diagnosis to rush him to the hospital's catheter lab, the outcome was better than usually expected for a heart attack this severe.

RELATED: 'The water just pushed me out' | Galveston boy brought back to life after nearly drowning in rip current

"If we identify it early, we can fix it. But if we don't, it's usually fatal," Smith said. "I almost never see it fall into line that perfectly. I mean the timing and the recognition of the cause. One of the quickest most successful cases I've ever seen where everything just fell into line perfectly."

"The people who saved me, they are heroes," Vaughn said of the team of first responders and Baylor Scott & White medical personnel who teamed up to save his life. "I know they say 'It's just doing my job.' Well doing their job kept a family together," he said fighting back tears. "And her remembering CPR kept me around," he said of his wife.  "So it's more than just doing a job. It's keeping a family together."

And there was one more person he needed to tell that to. A month-and-a-half after the heart attack, he still hadn't gotten the chance to meet officer David Taylor.

It finally happened at Rockwall City Hall on August 2. The two embraced immediately.

Taylor is a British transplant to the United States. He is a former combat medic and a nurse who says he has tried to save dozens of people with CPR before. Rob Vaughn was just his second CPR success story.

"It isn't very often we get success stories like this. Twenty years and you're only the second person," he told the Vaughn family.

"That's definitely the highlight of my career," Taylor said. "He's still here to enjoy his life with his family. His daughter, his wife."

"I know they said they're just doing their job, that they're not heroes," Vaughn said in the lobby of Rockwall City Hall that night. "But they are to me. Because they kept our family together."

"Angel is all I can say," Beth Vaughn said. "These are the angels back here."

Those angels got life-saving commendations that night. Officer David Taylor and Officer Aaron Raymond, along with the Rockwall Fire Department's Zach Yates and Greg Givens, were presented with Life Saving Awards at the beginning of the August 2 city council meeting. And then the city hall crowd got a special visitor. Never one to shy away from a microphone or an audience, Rob Vaughn stood up to offer a public word of thanks.

"I just want to say thank you. I'm the life that they saved that night," he said as the crowd applauded. "So I am glad to be here!"

And that's what Rob and his family promise to do now. A man used to spreading the gospel, often in his sermons telling people "we don't know how many days we have on this earth,"  has a couple extra verses to share now: the gospel of CPR.

"This is just part of our story now. A new part of it. And so we are here to champion that people need to learn CPR it does save lives."

"God still has work for Rob Vaughn and I and this family to do," Beth Vaughn added.

Because wrestling mat or bathroom floor, he's not down for the count just yet --- thanks to CPR.