She wants other mothers and mothers-to-be to learn from her mistakes and listen more closely to their bodies. 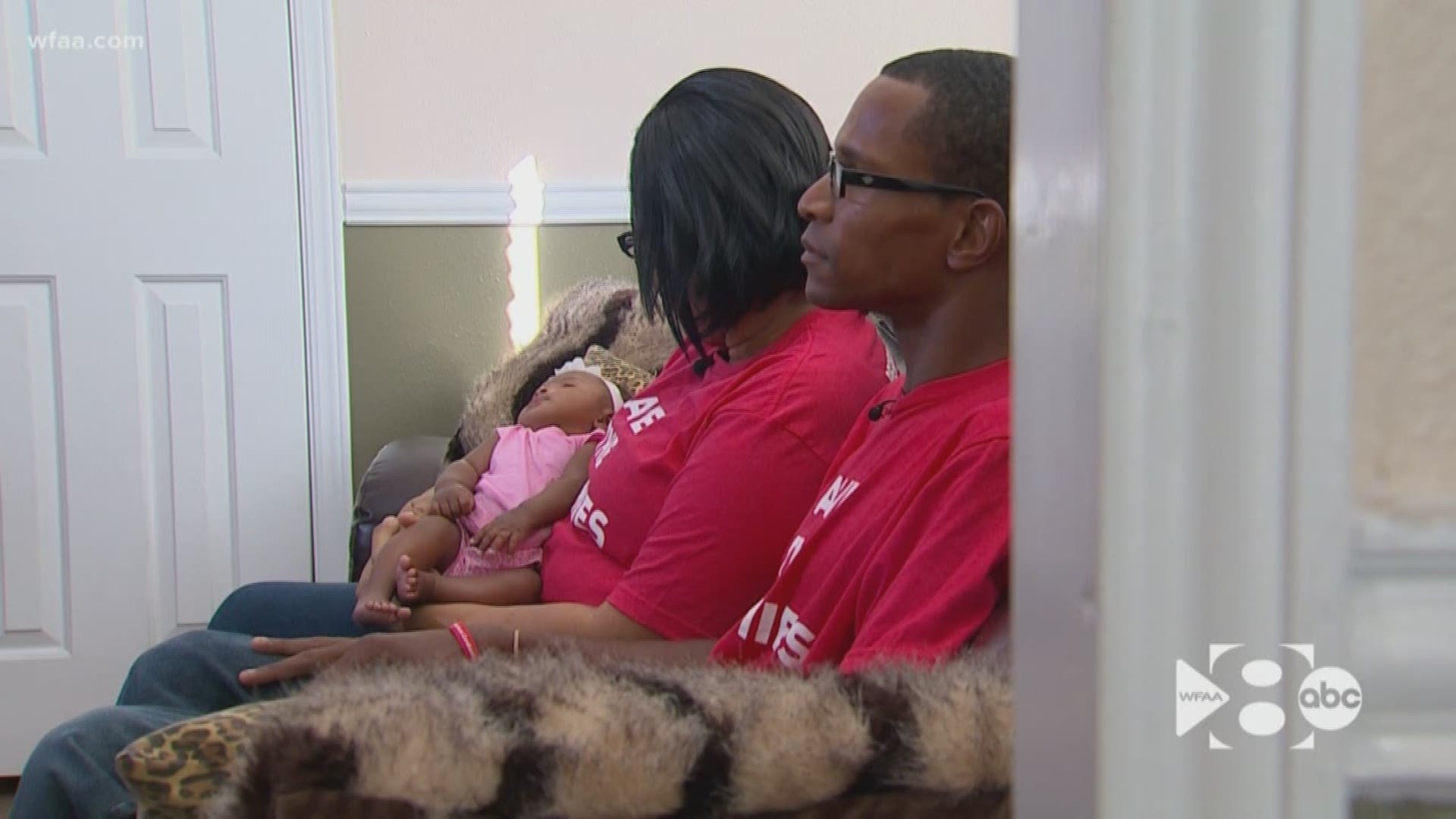 DALLAS — Spend one minute on the couch with the Leverette family and you feel love.

Start one conversation with them and you feel fear. “You don’t know when you’re going to breathe your last breath,” said Irindric’s wife Bobbi. “I didn’t know, there was no warning. I was here, gone, and here.”

She laughed a little, showing she doesn’t dwell on the what if’s. But she definitely thinks about them. How could she not? She survived sudden cardiac arrest. “It was crazy,” she said.

In the final weeks of her otherwise normal pregnancy, Bobbi began to have trouble breathing. Her legs swelled. She couldn’t lie flat. It was her second pregnancy, and her older daughter was born without any complications.

She didn’t remember having trouble breathing the first time, “but I just thought it was because I was big and pregnant,” she said. Journii arrived a few weeks early, but Bobbi’s symptoms worsened.

“I’m shivering, sweating. I cannot walk a couple of feet in front of me without gasping for air,” she said. “It was horrible.”

Two weeks after giving birth, she went to the emergency room. “Really, all of her symptoms were consistent with what we call peripartum or postpartum cardiomyopathy,” explained Dr. Andy Berggren, the Baylor Scott and White cardiologist who diagnosed Bobbi. “Very short of breath, a lot of fatigue, high heart rate.”

Peripartum cardiomyopathy is a form of heart failure that can happen during or after pregnancy. While it is rare, it is on the rise, especially among black women, Berggren said.

“Women of African American descent are at a much higher risk. Women over the age of 30 are at a higher risk, and then women who have had multiple pregnancies in the past,” he said.

The cause is a mystery. “And it is frequently overlooked, because a lot of the symptoms of heart failure can mimic normal postpartum symptoms,” Berggren added.

One in about 3,000 women experience peripartum cardiomyopathy. It can appear in the last month of pregnancy up until five months after giving birth.

Medication usually helps restore a woman’s heart function after she is diagnosed with peripartum cardiomyopathy, but Bobbi’s case was severe. “She was at a very high risk of developing sudden cardiac arrest,” he said.

With her heart functioning at just 25 percent, Bobbi left the emergency room with a wearable defibrillator called a Life Vest. Doctors told her to wear the vest at all times, except in the shower. She followed orders.

Within two weeks, the Life Vest saved her life. “I’m lying in the bed, Journii is squirming in her bassinette, and thankfully I didn’t pick her up,” Bobbi recalled. “I’m on my cell phone and I black out, just like that.”

She woke up to the vest beeping. It had administered a shock to restart her failed heart. “If I did not have that life vest on, I’d be dead,” she said.

With a new life beside her, her own life could have ended. A days-old daughter almost had no mother. And her husband almost had no wife.

During an EKG in September, Bobbi’s heartbeat sounded strong and steady, thanks to a permanent defibrillator and pacemaker that was surgically placed in her chest. Bobbi remains fatigued, but Berggren is optimistic. “And I feel very good about her overall prognosis,” he said.

Bobbi and Irindric joined a support group for survivors of peripartum cardiomyopathy called Save the Mommies. They wear red t-shirts and proudly display stickers on the bumpers of their vehicles, hoping to raise awareness. A Go Fund Me account is helping the Leverette family afford medical bills.

She wants other mothers and mothers-to-be to learn from her mistakes and listen more closely to their bodies. “Don’t wait until you can’t breathe, like I couldn’t, to finally say something or to finally act,” she said. “I waited way too long to go to the hospital. I mean way too long. I waited until I could not breathe any longer.”

The what if’s do bother her but holding Journii – who is healthy and growing – Bobbi is at peace. “She’s a blessing in itself,” she said. “I’m doing everything I can to get back on the healthy track.”