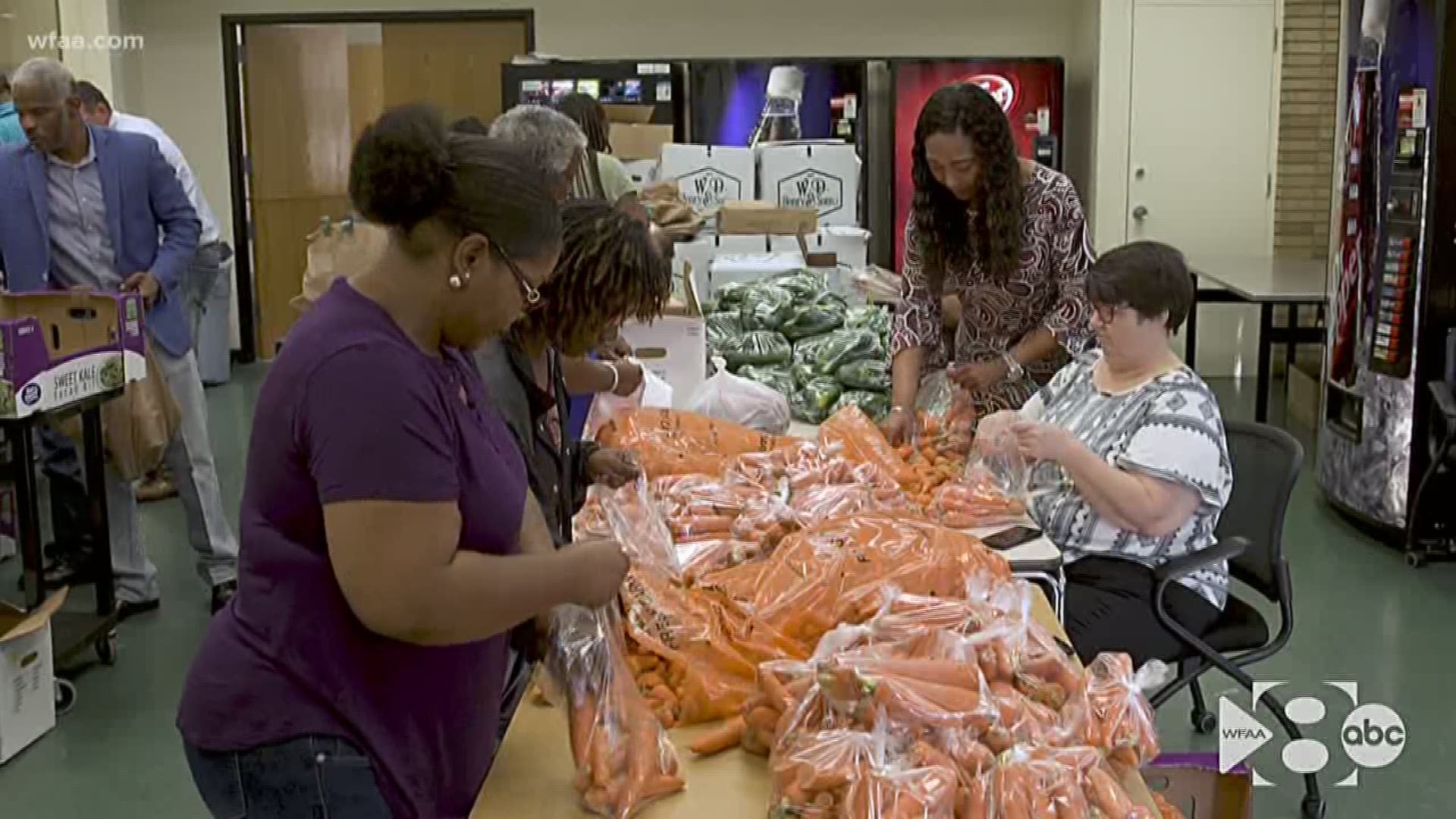 DALLAS — A new community-based program is working to provide free fruits and vegetables to residents who don’t have convenient access to fresh produce.

Every Wednesday and Saturday a backroom at the Martin Luther King, Jr. Community Center in South Dallas becomes sort of an assembly line.

Volunteers are busy bagging a variety of produce that is shared with people and families visiting the new MLK Fresh Food Distribution Center.

Kenneth James said, ”Everybody knows Mr. James when they come. The man with the beard.”

James is the first face most clients stopping by the center will see. He makes sure people are checked in and in line to get a sack of free and fresh produce.

Credit: WFAA
Residents visit the center twice a week to pick up bags of fresh produce.

Residents from across the city of Dallas are visiting the MLK Fresh Food Distribution Center. However, workers say the data shows most of the clients live in zip codes 75215 and 75216.

Those zip codes are in areas where many neighbors say access to fresh options are few, and where full service grocery stores aren’t convenient or they don’t exist.

”It’s a food desert,” said Richard Miles. “You know, a lot of people in this community do not have fresh produces, or access to fresh produces.”

Miles is founder of Miles of Freedom. The Community-based nonprofit oversees the MLK Fresh Food Distribution Center. Its workers and volunteers help bag more than 5,000 pounds of groceries distributed from its service window twice a week.

Miles said, ”Dallas believes everybody has access. And the reality is they don’t.”

Workers say they are seeing clients from all walks of life.

Those living in 75215 and 7516 are in communities tackling some of the same health challenges, including diabetes, hypertension, high blood pressure, and stress.

It is the desire for healthy options driving many people to the food distribution center.

Lorenzo Howell said, "I’ve laid up in the hospital several weeks, from being grossly overweight. Blood pressure 238 over 198."

Howell travels about eight miles by bus, just to get to the MLK Fresh Food Distribution Center. That’s at least an hour’s commute for fruits and vegetables.

Howell explained, ”I can find it over there where I live at, but it’s so expensive.”

Credit: WFAA
Fruits and vegetables are available at the center

Affordability is, yet, another reality factoring into some families’ food choices. Howell’s been getting produce here since the center opened in June 2019.

Howell says eating fresh food has also allowed him to get off insulin.

He is also exercising more.

In southern Dallas, the new MLK Food Distribution Center has become part of a community effort to specific neighborhood needs.

James said, “One thing I found out -- when you impact a life, that life impacted will impact a community.”

The center also needs more volunteers each week. If you would like to help you can call 214-290-2337 or email mlkproducedistribution@gmail.com