Sonja Castillo, the manager of the Neonatal ICU at Medical City Plano, says there are enough studies to prove the value of a warm touch for babies. 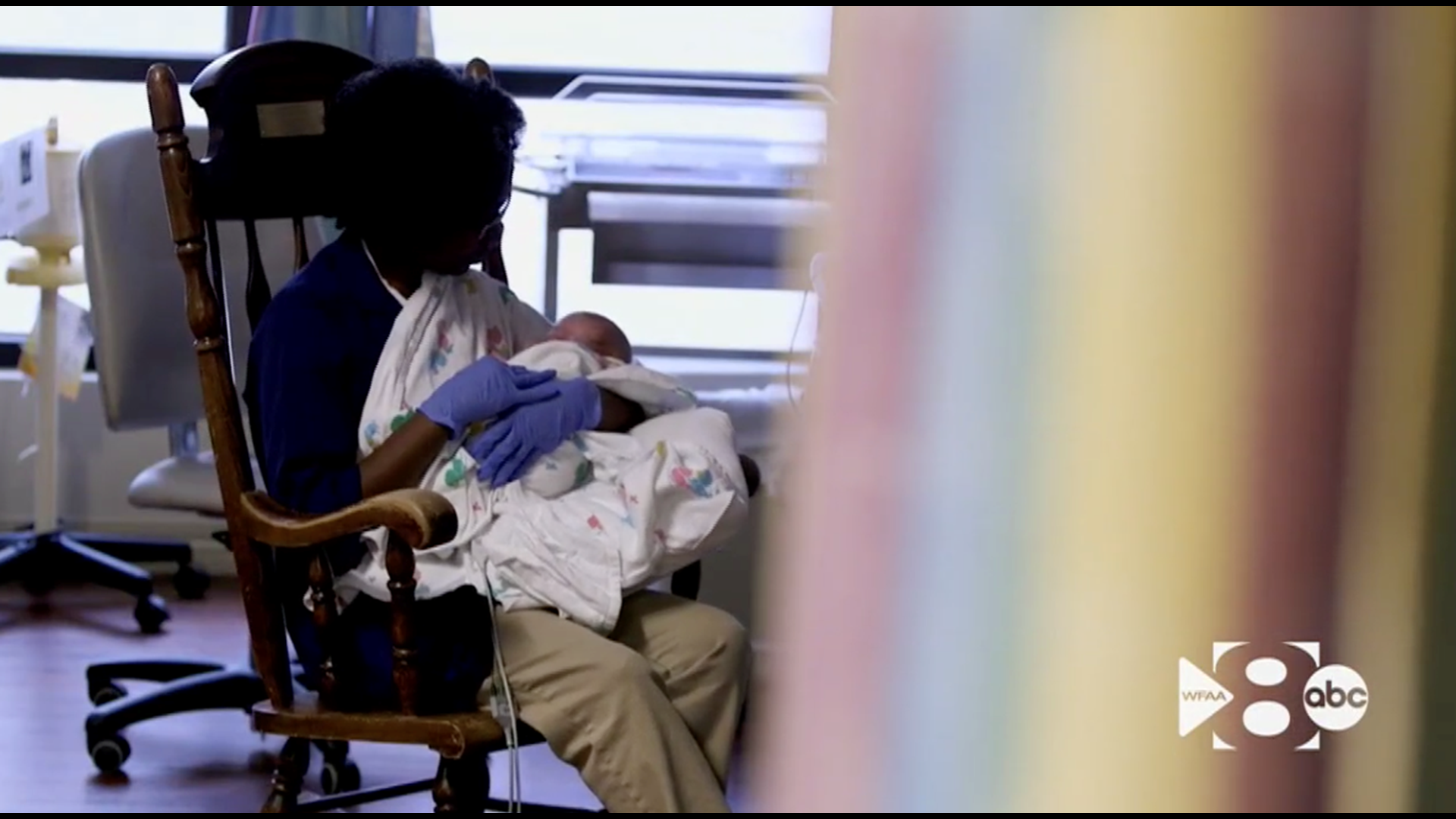 PLANO, Texas — Carlene Maxie of Sachse knew all along she wanted to help people after she retired from 30 years as a logistics specialist in the Navy.

Maxie thought she would take it easy for about a year and then start looking for things to do. She told WFAA that within a week she was contacting Medical City of Plano about its cuddler program.

The cuddler program allows volunteers to spend quality time with babies in the NICU.

"Those babies give me life," said Maxie, who takes an evening shift on Sundays to volunteer as a cuddler.

Medical City Plano currently has 17 cuddlers taking shifts to cuddle with the babies. Sonja Castillo is the manager of the Neonatal ICU and she says there are enough studies to prove the value of a warm touch for babies.

Castillo says it is impossible for families to stay with their babies all the time, so having the volunteers is a valuable resource.

WFAA tagged along with Maxie as she spent quality time with babies in the NICU. She could be seen talking and singing and humming while rocking in the chair as the babies slept in her arms.

Maxie told WFAA she takes after her mother Cathy, who had a servant's heart. She says the family never had a lot of money but her mother always found a way to help other people. Maxie says when she was young she would return home from school and find strangers sitting at the dining room table. Her mother was always inviting over people experiencing homelessness for a warm meal or a place to stay.

In 2001, Maxie's mother was murdered in Houston by a boyfriend. Maxie was stationed in Pensacola, Fla. at the time and she learned about her death after getting a call from her sister.

"Families just snatched away...you don't get that back, they don't come back," Maxie cried.

Her mother's death is one of the main reasons she wanted to engage in volunteer activities after retiring. Maxie says she understands that feeling when a mother cannot be there for a child. So she wants to be there for these NICU babies.

Maxie says the little conversations they have between cuddler and baby is all about positive encouragement.

"This is four hours of interaction undistracted with another person," said Laura Gallaway, who is a cuddler and was a mechanical engineer who retired from Raytheon.

Some of these babies have been here weeks, and in some cases, months. Castillo tells WFAA not just anyone can walk in and start to interact with babies.

It is a rather rigorous process that involves interviews and drug screens and requirements, like being able to lift 20 pounds.

"It is a pretty rigorous process and we have some great candidates who come out of that. When they come up here I think it changes the dynamic for everybody," said Castillo.