Before going to prison for the 'K2 crisis,' Amy Herrig seeks redemption

The owner of The Gas Pipe is now serving the homeless out of the same room where she used to make K2. 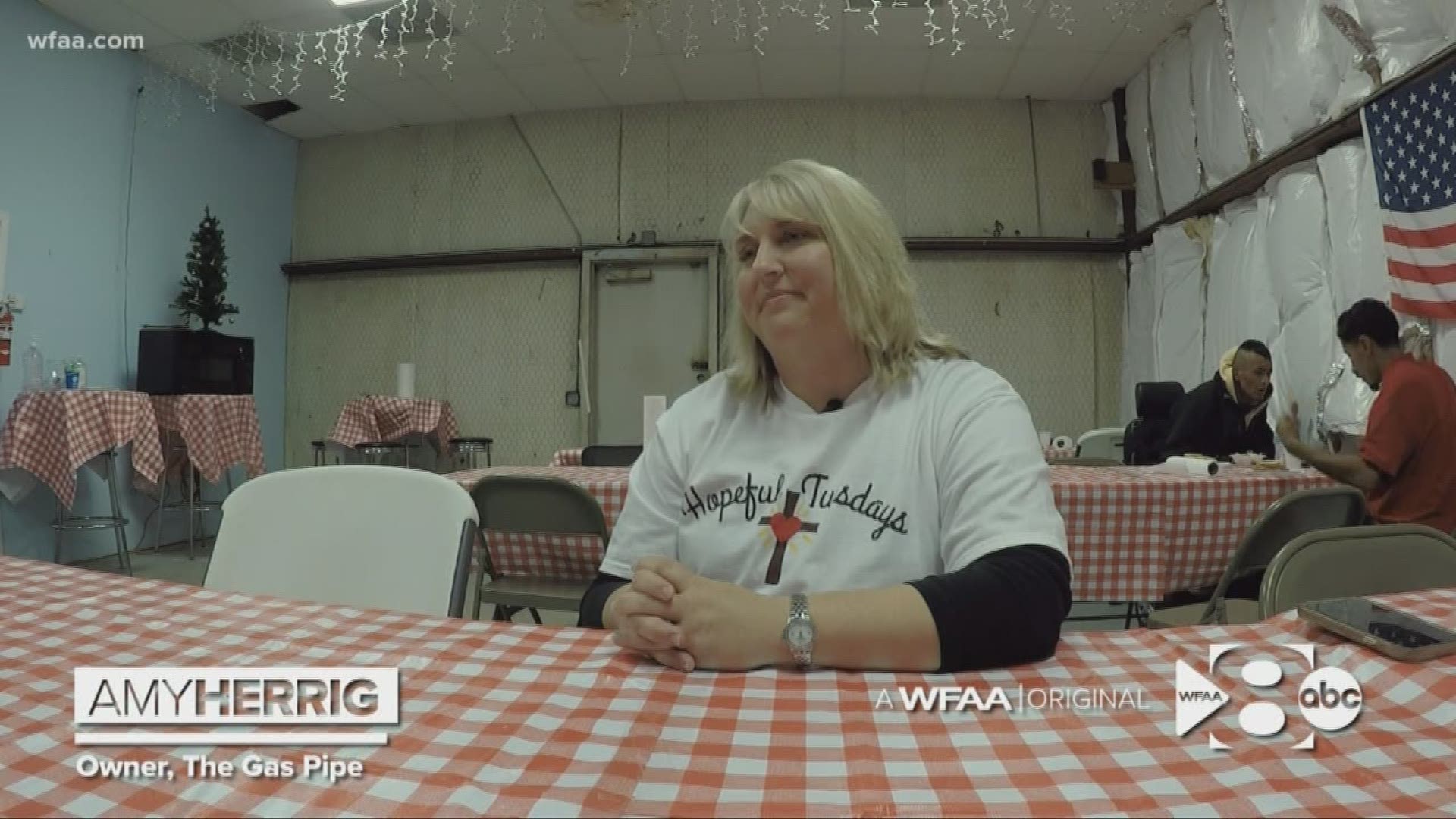 DALLAS — There’s an air of happiness at the warehouse on Maple Avenue, with people whistling and hugging, swapping stories and sharing a meal.

But happiness does not usually come easy for the people gathered here.

“It’s so miserable out there when you have no place to go or no family,” said Jill Kaufman. “This gives us hope every day.”

Kaufman was sitting in a folding chair at a folding table – one of five lined up inside a back room of the warehouse.

She’d just finished a hot meal and a shower. And while she wondered where her next shower and meal might come from, for at least a fleeting moment, Jill felt dignity.

She’s a recovering heroin addict who lives in hotels or abandoned buildings – wherever she and her boyfriend can find a spot.

“Every once in a while, we even do their laundry and stuff like that to help them out,” said Keith Ousley, the chef who cooked the hot meal Kaufman and about three dozen other homeless people enjoyed.

“I’ve been on both sides of this road,” he said. “A hot meal is like walking up to a homeless person and handing them a $100 bill.”

Ousley is permanently off the streets thanks to the woman who gave Jill and others temporary refuge at the day shelter she runs inside the warehouse.

The woman’s name is Amy.

“Amy’s got a big heart, that’s for sure,” Ousley said.

Even though Amy hasn’t lived the life Ousley and Kaufman have, they see her as an ally.

But the federal government sees Amy as a criminal.

RELATED: DEA: Synthetic marijuana bust a 'shot across the bow,' more to come

Amy Herrig co-owns The Gas Pipe with her father, Jerry Schults. The Gas Pipe is a chain of Dallas-based smoke shops that sold a product the U.S. Drug Enforcement Agency and police across the country said stretched law enforcement resources to its limits.

Officers said K2 either sent a user into a zombie-like trance or gave them almost superhuman strength making them nearly impossible to restrain.

The drug was cheap to buy, easy to smoke and hard to quit. The homeless became its biggest victims.

Users would openly smoke it on downtown streets because it was legal and not well-regulated. Dallas police recorded 137 K2 overdoses in an 18-day span in July 2017.

“You’ll never hear me say that what we sold was a great thing,” Herrig now says. “There’s nothing positive about it. I won’t try to put a happy spin on it. It was a business decision that went way wrong and out of control.”

Herrig admits at points in her life money has mattered more to her than morals and that’s what led to the decision to not just sell synthetic marijuana but to also manufacture it.

“You have this synthetic cannabinoid which is a powder,” she explained. “You mix it with an herbal plant material and put it in these shiny packets that we’ve all seen all over the news now. And people would smoke it.”

In October 2018, after a four-year federal investigation, a jury found Herrig and Schults guilty of mislabeling the product they manufactured - calling their K2 "herbal incense" and making it appear harmless.

Amy is scheduled to report to federal prison to begin serving a 36-month sentence on November 5, 2021. Her father is in prison now.

The ordeal gave her a new perspective on the population her product had harmed.

Credit: WFAA
This sign is posted at the entrance to the Hopeful Tuesdays ministry, which operates out of the same room where Amy Herrig used to manufacture K2.

“We’ve had homeless people in this neighborhood ever since we’ve been here,” she said of The Gas Pipe warehouse, which now houses her Hopeful Tuesdays ministry.

“I would look the other way and not think about it because my life was good and easy and privileged. And when I was faced with the prospect of losing everything, it made me realize that we all need a helping hand sometimes.”

Less than a year ago, she started her outreach by buying a homeless man a cheeseburger and inviting him to join her in her company’s break room the next day.

She now serves about 30 people a day, four days a week out of the same room where she made K2.

“We had this room back here that was empty and was sort of a painful reminder of something negative that had happened,” she said.

According to the DEA, K2 is not the problem it once was in Dallas. While the drug is not completely off the streets, K2 arrests and overdoses have dramatically dropped. DEA agents say meth and cocaine are more prevalent in 2020.

Amy said Hopeful Tuesdays is not an attempt to make herself look better in the public eye. And she says she isn't doing this to lessen the guilt and shame that once consumed her.

“It’s an attempt to pay it forward,” she said.

“Human beings are human beings. And I think we need to remember that we’re really all the same. Any of us are one step away from where we can lose everything.”

“I wouldn’t be doing this if the last five years hadn’t happened,” she said. “It changed my life dramatically.”