Arlington teacher fights second round of cancer with laughter

A teacher, a wife, and mom who thought she'd beaten cancer once was right back where she started. 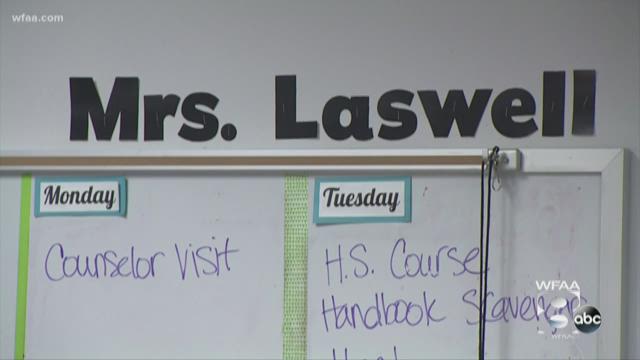 If, as the old adage goes, laughter is the best medicine, then a middle school teacher in Arlington is battling her second round of cancer with the best medicine she, her family, and a standup comic can find.

Jade Laswell, a seventh and eighth grade teacher at Shackleford Junior High, had her first cancer scare September of 2016 at her very first mammogram. She was only 41 years old when her doctors found a suspicious lump, which led to a bilateral mastectomy, chemotherapy, and a doctor's promise that the odds were in her favor: that her type of cancer only had a 2 percent to 5 percent recurrence.

"And I was actually in the middle of a reconstruction surgery this January when, the morning of my surgery, I found a lump. My surgeon found me, sat down next to me to tell me there were cancer cells on that lump. So, we've just started over again a couple weeks ago," she said.

She was one of the 2 percent to 5 percent. A teacher, a wife, and mom who thought she'd beaten cancer once was right back where she started.

"My heart like, literally, how do you describe like, where you have that dropping feeling in your stomach, where like my breath literally was taken away? I was just devastated. Absolutely devastated and couldn't stop crying," she said.

What you'll notice if you're around Jade for only a few minutes, whether at school or at home with her husband and four children, is that instead of crying, she very much prefers to laugh instead.

"It's a very, very dark place when you're dealing with cancer. It's scary, and there are a lot of scary things. And to be able to make fun of it, kind of takes the power away from the cancer," she said. "It's nice to connect with other people who get that, who understand that fight! Because not everybody will understand that fight."

She found that someone on a recent Friday night at the Deep Ellum Art Company. The performer was a San Antonio native named Larry Garza. A stage 4 kidney cancer survivor, the "cancer comic" has made his journey, and his survival, part of his act.

"So on a lighter note, I almost died," he said to loud, but sometimes, uncomfortable laughs from the comedy club crowd.

And on this night, Jade Laswell was in the crowd, soaking up all the potential best medicine her fellow cancer fighter could offer.

"I had a grapefruit size tumor grow in my kidney," he told the audience. "That developed into a lemon size tumor in my lung. You guys have no idea how hard that is for a Mexican to grow fruit and not be able to sell it! That was really hard for me," Garza joked as the crowd, including Jade Laswell, laughed.

But to any fellow cancer fighters that might be in the audience, he sincerely offered this. "Come talk to me after the show, we have a connection now," he said.

"Yes we do," said Jade seated next to her husband in the audience.

The two cancer fighters did meet after the show, shared stories and shared laughs for more than a half hour.

"And you're gonna be fine," Laswell replied. "And we just keep going."

"And we're going to be like 80 years old saying, 'Remember when we were scared we had cancer," Garza joked as they shared another laugh together.

"You just have to frickin’ laugh through it," Laswell said. "What are your choices?"

"When you joke about it, you take the power away from it," Garza said.

"That's exactly what I said earlier," Laswell replied. "Did you hear that earlier? I said that earlier!"

"Joking about it to me is really important because it lightens it," Garza said in an interview with WFAA photojournalist Michael Botsford. "As much negativity comes with the disease, one thing that is positive about it is community, is family, and love really. I know it sounds mushy, but it's true."

Studies have shown that laughter does have its benefits -- that people with a strong sense of humor have outlived those who don't, especially when battling something as brutal as cancer.

Jade Laswell plans to keep busy laughing, especially when she gets news like she got last week. She made the announcement to her students at school.

"Well, it came back clear. There's no cancer. So they're not finding any cancer in my body," she said as the students responded with applause and hugs.

"And sometimes, with this cancer fight, it's just about waking up and putting one foot in front of the other and hanging onto a little tiny piece of hope that you can survive what the day is going to bring you, because you really don't ever know," she said.

But we do know that in her classroom, among all the positive and encouraging messages on the walls, is the one right behind her. It says "a day without laughter is a day wasted."

So here's to Jade's and Larry’s journeys of no wasted days and laughing in the face of cancer every precious moment they can.

Jade Laswell is also busy running her own nonprofit. It's called Craft Hope and sends care packages to families in need, including children in hospitals fighting their own battles with cancer.

Larry Garza, meanwhile, said he is improving too, healthy enough now to tour comedy clubs all over Texas.

Click here for information on how to donate to Jade Laswell's fight on cancer.