A teacher stockpiled supplies for at-risk students. When he died, his school built on his legacy in a big way

Kelly Boston was killed in a car crash in 2016. Now, his compassion is known throughout the small community of Ennis. 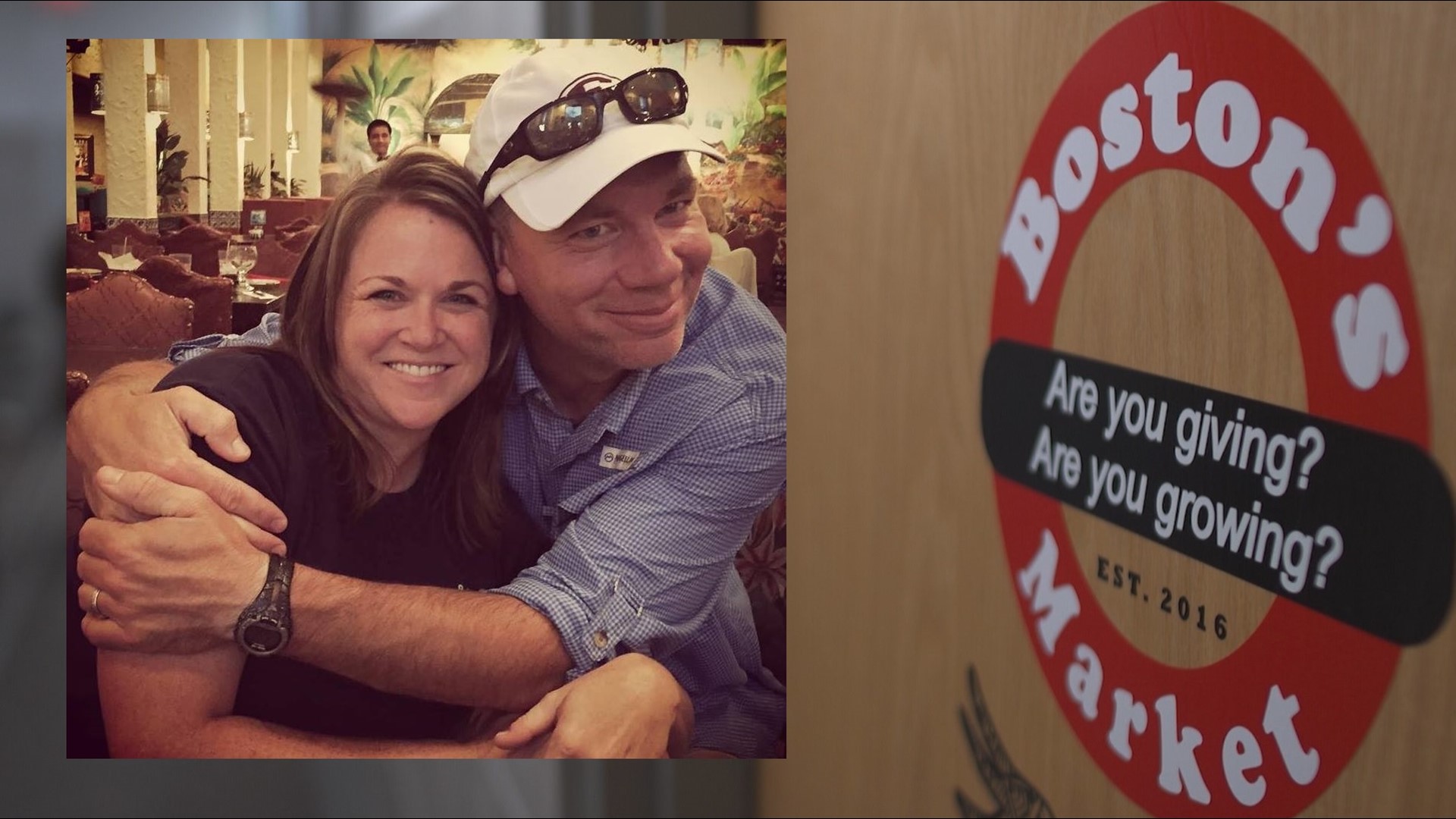 ENNIS, Texas — A beloved horticulture teacher from Ennis who was killed in a car crash nearly four years ago continues to show how powerful a helping hand can be, and how far it can stretch.

Say the name Kelly Boston around the small community that's almost 40 minutes south of Dallas and people likely won't hesitate to recognize it.

Boston, 47, started teaching at Ennis ISD in 1992 and spent 24 years in the classroom. But it wasn't until his untimely death when many began to realize just how much he gave back to his own students.

'He was about relationships'

No one can describe Boston better than the woman he asked to marry him, Penny Boston Hollywood.

"He was inspiring, he was very positive, and simply put he was about relationships," Hollywood told WFAA.

The two tied the knot in 1998 and began raising two daughters shortly after.

Boston started at Ennis High School as the horticulture teacher and officially planted his roots in town after marrying Hollywood, who grew up in Ennis.

He often spent his time in the greenhouse adjacent to the school and championed bringing the best out of his students.

Boston would often record YouTube videos encouraging those he taught and was always a favorite among teens when they chose an elective course.

And that says a lot, considering Boston taught how grass grows.

"He would despise the fact that so many people talked about how giving [he was] and how much effort he put into his kids," Hollywood said. "He was very humble and the relationships mattered most to him."

'Not a dream, a nightmare'

She, Boston, and her extended family were on a vacation in Colorado. It was the last night of the trip, so Boston and his brother-in-law agreed to go pick up some pizzas so no one would have to cook.

Credit: Penny Boston Hollywood
Boston catching a trout in Colorado. The photo was taken hours before he died.

But when the two took longer than usual, Hollywood became concerned.

"We started calling and there weren't any answers so we eventually got in the car to see what was wrong," Hollywood said. "It was probably less than a mile from the house we were staying in when we saw the emergency vehicles."

Hollywood started to fear the worst.

"I told an officer that my husband had come this way, and his expression completely changed and he asked us to pull over," Hollywood said.

Boston had been in a car crash. His brother-in-law was taken to the hospital and ultimately survived, but Boston didn't.

Hollywood had to come back to the vacation home her daughters were anxiously waiting in to deliver the heartbreaking news.

"It's the hardest thing that I've ever had to do, and to watch their reactions felt like a dream," Hollywood said. "Not a dream, a nightmare."

The news of Boston's death traveled quickly to Ennis.

Credit: Boston Family
Boston poses with students before they walk the stage for graduation.

"I remember picking up Kelly's phone and looking on Twitter, and I was so overwhelmed by the student response," Hollywood said. "It was insane, boys were calling his number and leaving voicemails and he was getting text after text from kids saying, 'Please tell me this isn't true.'"

After Boston's funeral, stories of his compassion began to swell in Ennis.

He was vital in initiating an at-risk mentoring program at Ennis ISD, but it's an innocuous closet in his classroom that Boston is now most known for.

Hollywood can explain its purpose best.

"A couple of years before he died, he came home and said that he wanted to start a little closet in his classroom for some of his kids," Hollywood said.

In that closet, Boston kept basic toiletries, food, clothes, and classroom supplies for students who needed them most. Zero judgment and free of charge- just ask Boston if you need the help.

Credit: WFAA
Boston poses with students in the school's gymnasium.

That story of Boston's helping hand, the one he despised to brag about, began to take on a whole new life.

Before his death, Boston talked about expanding his closet into an unused bookroom at the high school.

So not long after Boston's passing, the school did just that.

The room is pretty large, larger than the old closet, and is filled with all kinds of toiletries, food, paper, pens, pencils, notebooks and backpacks. There's even a clothing rack.

Principal Wade Bishop told WFAA that Boston's Market has helped dozens of kids and their families.

"I try to do school the way Kelly Boston would do school," Bishop said. "Having a place for our students in need, it's just awesome we can do that and the donations we receive in Kelly's honor make me very proud."

"He made it happen, just a huge impact for Ennis High School."

Hollywood, who works at a neighboring school, sometimes finds herself at Ennis High.

She's remarried now, but still fondly looks at the place that will always carry the memory of her late husband.

"When I walk through here, I just carry so much pride in who he was as a person. It makes me happy that my daughters have gone to school here and have watched this evolve into what it is," Hollywood said.

If you look around the school, you can also find the hashtag #LoveLikeBoston in many places.

Bishop says it encourages compassion on a daily basis and is a mentality for staff.

"He continues to make a great impact," Bishop said.

"It's like having a piece of him here all the time," Hollywood said. "He has a legacy, and I don't see it ending anytime soon."