A dad, a son and a kidney named Junior: WFAA photographer's sacrifice saves his father

"It's a small investment I can make in having a dad around." 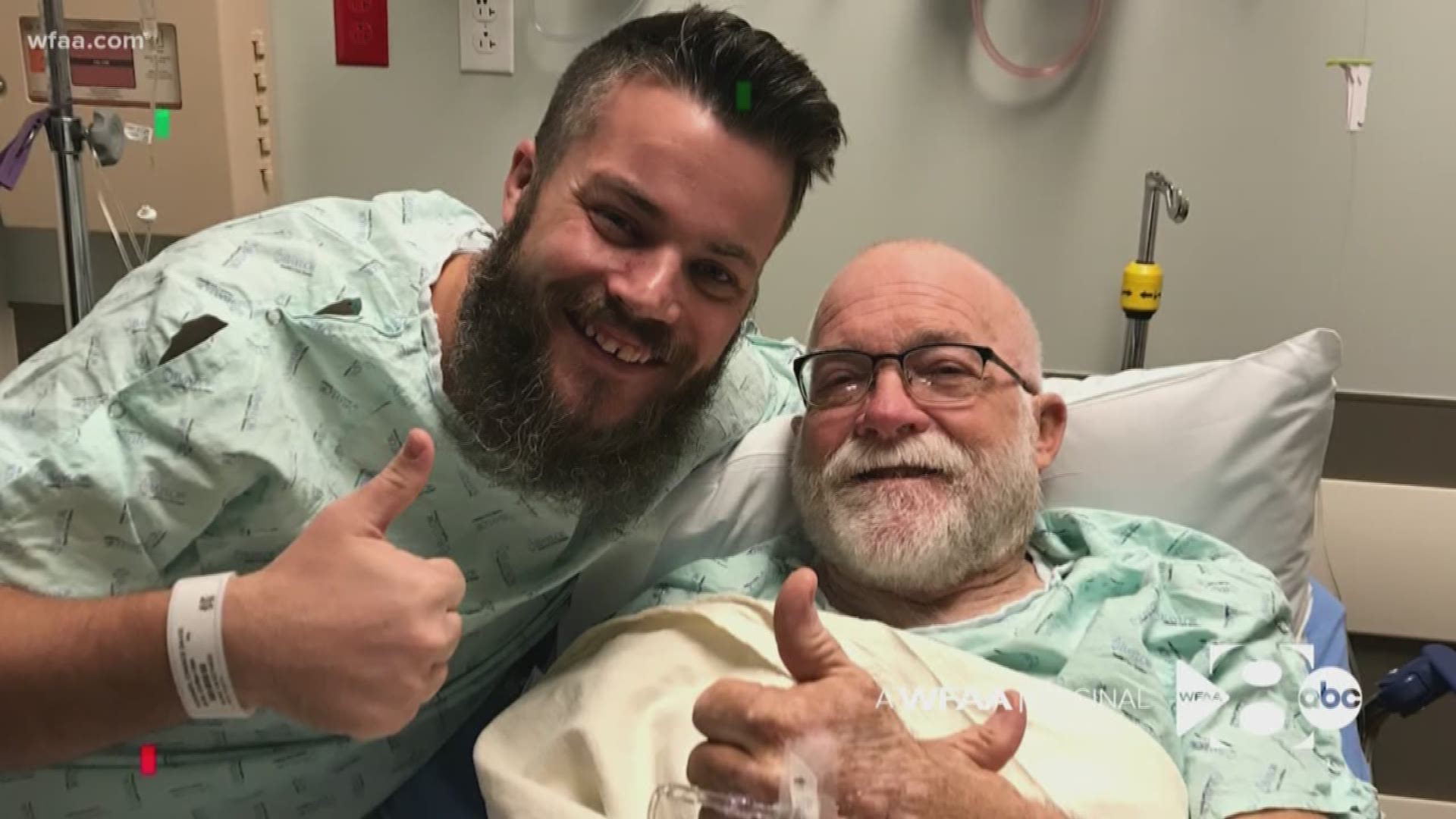 DALLAS — With a little arm-twisting, and some respectable begging, I got Chance Horner to tell me his story. Because, it's a story worth telling and and a story worth sharing on the chance that someone else might consider making the same brave, selfless choice he did.

Chance Horner is a photographer here at WFAA. He's the producer behind the camera for most of the Verify segments with veteran reporter David Schechter. But one day I stopped to talk to him in the TV station parking lot. I was concerned. He was losing weight and losing it quickly.

"I mean, my worry about this whole thing was that somebody at the station was gonna be like 'Oh a news story,'" Chance told me.

But it was a news story once he admitted why he'd suddenly dropped more than 40 pounds.

"It's a great weight loss motivation. It's like hey, drop some pounds or your Dad dies. That's pretty good motivation," he said.

His motivation is his dad David Horner, 63, a high school coach who also runs his own trophy business in Honey Grove, northeast of Dallas. But in addition to what has been described as an "awesome Santa Claus beard," he also has high blood pressure and diabetes.

"I controlled it pretty well. But it got worse as the years go by," he admitted.

A life-and-death kind of worse because kidney failure came next. Dialysis three days a week was keeping him alive until his son, Chance, made him an offer that he at first tried to refuse.

"He said, 'I want to give you a kidney,'" David Horner said.

"Now I had to talk him into just trying it. Because he didn't want me to do it," Chance said.

"I worry about if something happens to him later in life, you know," his dad said.

"I think if you have the ability to help somebody you should," Chance said. "I've gotta do this, because I don't know how to not do it."

So on a Tuesday morning at Baylor Scott & White Health in Dallas, with both of them now slim enough and healthy enough for the transplant, Chance the photographer couldn't pass up just one more selfie.

"So, how you feeling?" he asked his dad in his hospital bed shortly before surgery.

"You nervous," Chance asked him.

"Nah," David Horner responded, slightly under the influence of medication.  "I'll be asleep."

The surgery went as planned. One of Chance's kidneys, a perfect match for his Dad, was removed and carried to the operating room next door.

"So the surgery actually went fantastic," said transplant surgeon Dr. Gregory McKenna, who put the fancy medical terms aside and explained that fantastic surgery like this.

"Immediately after implantation, the urine was literally streaming several feet, there was so much force behind it. Chance, that was a powerful kidney," McKenna laughed.

Those now shared powerful kidneys, strolling side by side, had dad and son up and walking in the hospital the very next day. And with David Horner calling his new kidney..."Junior."

"I made good stuff," Chance laughed. "I don't know what to tell you. Quality products coming of Chance over here!"

According to the National Kidney Foundation, on any given day, there are more than 100,000 people waiting for a kidney transplant in the U.S. The wait for a transplant match can last more than four years. And on average 13 people die each day waiting for a gift that never arrives in time.

"And so someone like Chance donating a kidney is literally saving his father's life," McKenna said.

And there's one more motivation we should talk about. Melinda Horner, David's wife and Chance's mom, died in a car crash back in 2007.

"It's been 11 years now and I still miss her every day," David Horner said. "I wish she was here."

Chance wasn't ready to lose the only parent he had left.

"He's probably my best friend," Chance said. "When there's good news, when things are going wrong, whatever, he's my first call. And I want him to still be there on the other end of the line. It's a small investment I can make in having a dad around."

"And I never won an argument with her," David Horner joked. "And he's as much the same way so, so I just give up arguing."

"No. I think y'all are just good at arguing because I never won," his dad responded.

But this time, they both won. And transplant surgeons hope other families will consider this same happy ending. Like the story of the dad and the son, and a kidney named Junior, side by side through life as long as they can.

"I feel very blessed that I can return to a normal lifestyle because he sacrificed to give me part of him," David Horner said.  "Another day. All you need to ask for is another day."