From 2018: 'I'm a walking miracle': Music teacher back in classroom after told he’d never walk again

Skip Redd's life was forever changed when he was seriously injured as he performed during one of his favorite hobbies — the trampoline. But his determination and perseverance led to a 'miracle' recovery. 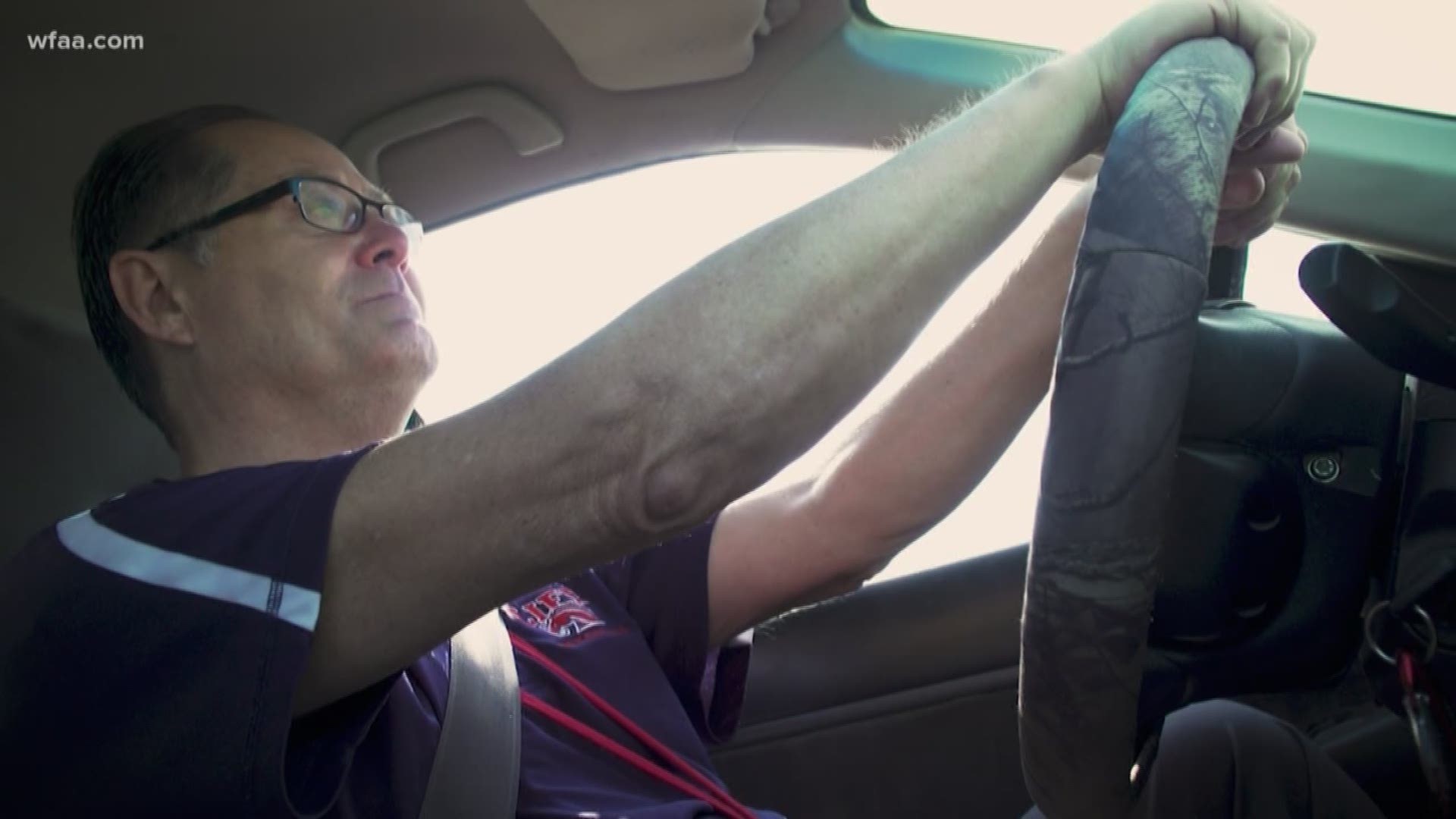 WAXAHACHIE, Texas — He's mindful of his every move.

He tells his hands to turn the steering wheel and tells his legs to walk, willing his feet to follow.

“Takes me a minute to get them to work,” said Skip Redd about his own two feet.

Driving is no longer second nature. Neither is taking a step.

He does few things subconsciously.

“It’s a place of peace, a place of comfort and safety,” he said as he sat in one of the pews inside the church that has been a refuge during the last year and a half.

He was on a trampoline, one of his favorite hobbies. Skip had performed half-time shows and had done tricks all his life.

A beloved music teacher, Skip was showing off his skills for his students at an end-of-school party. He tried to flip but landed on his neck and head. His students instantly knew something was wrong.

After a helicopter ride to Methodist Medical Center in Dallas, doctors presented him with terrible news.

“Dr. Mitchell came in and said, ‘You’ve broken two bones in your neck; you will probably be a quadriplegic the rest of your life," Skip recalled as he choked back tears. "You may never walk again."

Family and friends gathered at the hospital and prayed while Skip endured nine hours of overnight emergency surgery.

“When I woke up, I couldn’t move anything," he said. "I was paralyzed from the chest down."

Three weeks in intensive care were followed by two months at a rehabilitation center in Houston.

Slowly and painfully, he relearned how to live.

“I realized at the time that I needed to take one day at a time,” he said. “Sometimes it was only 15 minutes or an hour at a time, or even one step at a time.”

Skip’s wife describes him as a workaholic, and his grit won out. Skip began walking again, but he was a music teacher and a piano player. And one of his big fears was that he’d never play again.

A month or so into rehabilitation, a therapist wheeled in a keyboard.

The first song he attempted was something he’d played for years – "Amazing Grace." But this time, it was exhausting.

“What was frustrating was that I have it up here,” he said as he pointed to his brain. "But my body wouldn’t do what I was telling it to do like before the accident. So that session was very, very hard for me.”

But he kept trying. Little by little there was improvement. And his months of hard work and unmatched determination paid off.

In August 2018, Skip returned to his old classroom and the students who had witnessed his fall at the aptly named Life High School in Waxahachie.

He chose songs about hope and determination for his choir to sing this year.

And sometimes the words overcome him.

“You all do understand the message of that song, right?” he asked his students. “It’s about hopes and dreams and believing in yourselves.”

“I hope you see that in my life,” he told them through tears. “Even though my hands aren’t doing right, and I walk funny, I’m going to keep going.”

Several of the students who had seen him break his neck wiped their eyes.

“I think it’s a miracle, and I feel like we’re really blessed to have you back,” senior Gabby Post told him as class was ending.

“I was very motivated to get back in front of those students who witnessed my fall because I wanted them to see that life goes on,” he said.

“I didn’t expect anything less. It was either naivete, denial, or just overwhelming faith,” she says.

“He has so much heart and so much determination. Skip just did a phenomenal job in his recovery,” said Dr. Bartley Mitchell, a neurosurgeon at Methodist Medical Center in Dallas.

“We set him up to make a good recovery, but all of the rest of it - everything else - the months of rehabilitation, were all up to him, and all the other people involved in the care to get him to where he is today," Mitchell said. "And it’s phenomenal."

Skip, his wife, and their family never lost hope. He said he’s proof that none of us should.

“I think I’m a walking miracle because I shouldn’t be doing what I’m doing,” he said. “And, I’m not done. I think there’s still miracles to come.”