“Eddie the Eagle” is perhaps one of the more all around entertaining underdog sports films I’ve seen since “Cool Runnings.” It’s a feel-good, British-American dramatic comedy that tells the inspirational story of Eddie “The Eagle” Edwards, the first competitor to represent Great Britain as a ski jumper in the 1988 Olympics. 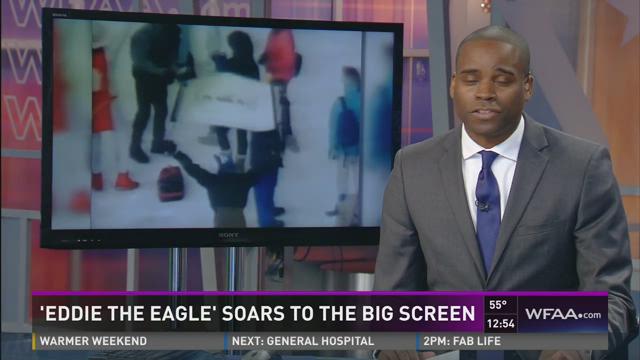 “Eddie the Eagle” is perhaps one of the more all around entertaining underdog sports films I’ve seen since “Cool Runnings.” It’s a feel-good, British-American dramatic comedy that tells the inspirational story of Eddie “The Eagle” Edwards, the first competitor to represent Great Britain as a ski jumper in the 1988 Olympics.

Starring Taron Egerton, Hugh Jackman, and Christopher Walken, it’s not necessarily the story that makes this film so good, but more so the way the story is told with solid performances and humor. Egerton plays Eddie Edwards, a quirky and almost always cheerful nontraditional athlete, while Jackman stars as his fictional coach, a washed up and drunken ex-athlete who shows Eddie how to be successful even as a novice ski jumper.

As a young English child, Eddie Edwards dreamed of being an Olympian, training in the most peculiar ways for various sports, until finally setting his mind on winter sports. Though Eddie is clearly not a typical athlete and is told early on by most everyone around him that he isn’t Olympic material, he continues to push on until finally deciding to travel to Germany with hardly any money to sleep in the closet of a bar and look for help in fulfilling his dream.

Without any prior experience, Eddie starts practicing on the smallest jump on the mountain and meets Bronson Peary (Jackman), who spends his time driving a snow plow and getting drunk, but to Eddie’s surprise, turns out to be an ex-ski jumper who was very talented in his day. After Eddie’s slight-yet-shocking success at jumping, Peary agrees to give him a few tips and eventually coach him, and Eddie’s desire and quick learning gets him to the point where he can qualify for the upcoming Olympic Games.

I didn’t know much about Eddie Edwards before this film, but Egerton gives a very good performance and appears to capture Edwards’s goofiness, expressions, movements, and spirit. Egerton’s interpretation of Edwards serves as one of the primary sources of comedy, be it the way he acts, speaks, a funny expression he makes, or simply his clumsiness. I’m not sure if you’d classify this as a British film, but a good portion of it takes place in foreign countries with a lot of dialects being thrown about, and thus the dialog and language also draw some laughs.

Jackman’s Bronson Peary presents a half-comic-relief-half-inspirational role as mentor to Edwards. He starts out reluctant to help, but after seeing Edwards desire and courage and also dealing with regrets from his own career, he makes all the difference in the world for his protégé.

The camera work and locations/scenery look great throughout the film. When someone is doing a ski jump, the camera shows you just a variety of perspectives, from first-person angles to a wide shots from the ground or sky level. Slow motion is also used a fair amount, mostly when someone is jumping. As far as the backgrounds and scenery, the snow-covered mountains, ski jumps, parts of London or other cities, and similar settings all look realistic, versus using a ton of CGI. The film also makes good use of what appears to be real video footage from the 1988 Olympics.

But it’s not all pretty. There are a handful of painful and brutal crashes. For someone like myself who doesn’t care for big heights, it was enough for me to see the higher jumps and imagine what it would be like even standing up there – nonetheless crashing down from that height.

To my own disappointment, I’ve learned that a good amount of the film is fiction. The true events happened differently, and even Eddie’s coach in the movie is fictional. From an entertainment standpoint, I don’t think this takes anything away from the film or the performances of the actors, and I’d imagine it’s fairly common for a story to be exaggerated and dramatized for film purposes. But be aware, some of the more fantastic elements may be completely made up.

“Eddie the Eagle” is a light and funny film about someone who follows his dream, despite just about everything working against him. There are numerous inspirational sports biopics and character piece films out there, from “Cool Runnings” to “Rudy,” and “Eddie the Eagle” matches up against the best of them and provides an international sports film that many different audiences can enjoy.

“Eddie the Eagle” is rated PG-13 for some suggestive material, partial nudity and smoking. Running time is 1 hour and 45 minutes.